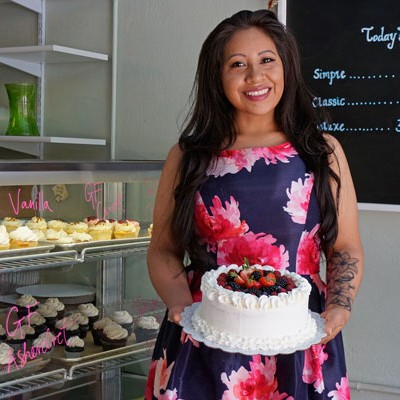 In 2006, Georgia native Jodi Rhoden began baking cakes for friends from her home in Asheville, North Carolina using traditional Southern cake recipes and local ingredients, and Short Street Cakes was born. Three years later, her business grew to occupy the sweet little Cake Shop at 225 Haywood Road.  Jodi has since become the author of the award-winning blog, My Life in Cake, and the book, Cake Ladies: Celebrating a Southern Tradition, a collection of life stories and recipes from Southern cake ladies.

Early in 2016 Jodi sold the business to long-time baker Olga Perez Jimenez and partner Tomas Aguilar Larrieta. As the shop’s production manager, Olga has overseen more than most the ins and outs of the shop during the four years she worked at Short Street Cakes.

Olga and Jodi met when Jodi was researching her acclaimed book “Cake Ladies: Celebrating a Southern Tradition.” Olga already had a loyal local following for her Tres Leches, a traditional cake with roots in South and Central America.

Jodi and Olga became fast friends and Perez’s Tres Leches cake was not only featured in “Cake Ladies,” it became the source for the recipe made and sold at Short Street Cakes. Soon after, Olga became part of the Short Street family, making the cakes and cupcakes the shop’s customers adore.

So when Olga and Tomas approached Jodi about buying the shop, Jodi was elated to have it stay in that family.

“I knew instantly that they were the right fit to take over,” Jodi says. “Olga already has her relationship with Short Street. She’s already part of the story. It ends up being a beautiful full circle.”

The transition makes perfect sense to Tomas and Olga as well.

“What better person to sell the business to than one of her best bakers?” Tomas says.

Moments at this location

Know more about the history of this location, or have a pic to share? Let us know!